Recipe for Vegetarian Barley Mushroom Casserole. A Czech-American recipe that Czech families call cermi buba, it is also a popular Eastern European Jewish casserole. From the book Bake Until Bubbly by Clifford A. Wright. 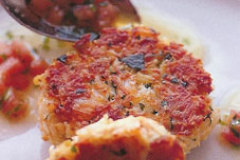