FabulousFoods   Articles   Cooking School
Find out what's in season all through the all-too-warm month of August.

Even as hot as it can get, August is when the farmers market really starts to heat up. All of the fine foods you expect from summer's bounty — corn, tomatoes, peaches and others — come into their own during August and reach perfection. Find out everything you can expect from the farmers market during the month of August.

By the beginning of August, corn has really come into its own. It's been on the shelves since July, but about this time, it's in full swing, the ears are long and lovely and the sweet corn is so very sweet. If you've not yet had the chance, get out to your favorite farmers market, buy a dozen ears, soak them and grill them until they're perfect. Toward the end of the month, consider buying a bunch, cooking it and freezing it.

Like corn, tomatoes have been showing up since July and they're good. However, in August they become amazing, juicy and full of that rich flavor that can only come from fresh tomatoes picked at their peak. At the beginning of August (or toward the middle of the month in very hot years), the best thing to do is buy tomatoes and eat them with just a sprinkle of salt, pepper and a few drops of olive oil. Toward the end of the month, buy a large batch, remove their seeds and make them into tomato sauce.

Chervil is a fresh herb that looks a lot like parsley. It has a fresh licorice flavor that makes it an excellent substitute for tarragon in many French sauces. If you've never had it before, buy a bunch, chop it, mix it with olive oil and use that to coat the outside of roast chicken. Once you've gotten used to the flavor, you can buy it in large bunches. Toward the end of the season, blanch the chervil, remove the stems and freeze.

You'd think that because tomatoes are in season, tomatillos would be, too. Well, you'd be right, but not because tomatillos are just little green tomatoes (in fact, tomatillos are members of the gooseberry family, not the tomato family at all). No matter why they're in season, the best thing to do in August is buy several baskets worth of tomatillos and turn them into green salsa, green enchilada sauce, green chili and any other sauce you can think of. Freeze as much of that as you can and keep summer going year round. 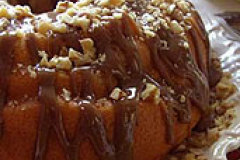