FabulousFoods   Ethnic Cuisine   Chinese
Master these five basic sauces to give yourself a foundation in Asian cookery.

5 Asian sauces you should master

When you talk about Asian cuisine, you are covering a lot of geography, history, culture and environment. There are different climates which produce different ingredients... which result in completely different dishes. Still, if you go to an Asian fusion restaurant, you'll see that at the end of the day, there are some basic sauces that form the foundation of a lot of Asian cooking. Though perhaps not as fundamental as the mother sauces are to French cooking, if you can master cooking with the following five sauces, you'll be on your way to exceptional Chinese, Japanese, Thai and Korean cooking.

Soy sauce is the most familiar of all Asian sauces. You've undoubtedly used it as a condiment on Asian foods before. However, it's also fundamental in the majority of Asian dishes as a marinade and it can bring savory saltiness to meat dishes from nearly every country.

There is danger to using soy sauce in cooking, though, as it is very high in sodium and can make dishes too salty. Therefore, when using it for marinades, look for low sodium varieties so you can control the amount of salt in your dish. Also, it's important to realize that soy sauce is not enough on its own. When you marinate meats with soy sauce, you should also include a sweet and an acid component like brown sugar and rice wine vinegar or soda (which provides both). This will ensure the marinade touches as many taste buds as possible.

To make your own marinade, try combining 4 tablespoons of soy sauce with 1 tablespoon of each brown sugar and rice wine vinegar. Marinate the meat at least an hour.

Hoisin has been called Chinese barbecue sauce because it is a mix of sweet, savory and spicy flavors... just like a good BBQ sauce. On the other hand, if you try hoisin expecting it to taste like your favorite barbecue, you're in for a shock. Hoisin is a mix of chilies, vinegar, salt, and starch, which has a predominantly tangy/sour/sweet flavor, almost like plum sauce. Whereas most barbecue sauces tend to favor savory and spicy flavors.

In Asian cooking, hoisin gets used in a number of dishes. In Chinese cuisine, it's an ingredient in barbecue pork, Peking duck, and some mu shu dishes. In Vietnamese cooking, it's a favored condiment in the famous soup, pho. It's also used in some marinades. However it's used, hoisin has a very strong flavor that can easily overwhelm a dish if you're not careful.

To get a feeling for how to use hoisin, make a marinade that is one part hoisin to two parts chicken broth and one part soy. Marinate chicken thighs for an hour or so, then roast the chicken in the oven for 45 minutes at 350 degrees F. Baste the hoisin over the chicken every 5 minutes for the last 15 minutes of cooking. Once you are comfortable with this, you can explore other ways to use it from there.

Oyster sauce is, as the name suggests, a sauce made from cooking down oysters and mixing in a few flavoring agents, usually sugar and other spices. The result is something that resembles dark brown gravy, but has a savory/sweet taste that makes it the backbone of many Chinese dishes. In fact, when you think about the typical Chinese foods you can find at takeout places like lo mein, cashew chicken, or Buddha's delight, the most common flavor is oyster sauce. If you still can't place the flavor, imagine a thick, sweetened soy sauce and you have something close.

In practice, you can pretty much add oyster sauce to any ingredient and get something that will closely resemble a lot of different Chinese dishes. Of course, true Chinese sauces are much more complex, but to get you started with oyster sauce, try this. Sauté some chicken, onions and bok choy in a skillet, then add some cooked lo mein noodles. Stir in 2 tablespoons of oyster sauce, a tablespoon of low sodium soy sauce, and a tablespoon each of garlic, ginger and red chili flake and you'll find you have an exquisite, easy-to-prepare Chinese meal which you can use as a springboard to other dishes.

There's a lot that can be said about fish sauce, but if you've never had it before, it's best not to think about it too much. Suffice it to say that fish sauce has an odor you will never forget, but, fortunately, it does not taste nearly as bad as it smells. In fact, fish sauce has a briny/flavor-of-the-sea taste that's really quite good.

In terms of its use, fish sauce is the star primarily in Thai cuisine where it's one of the main components of the famous dish phad thai. It's also boiled with sugar and lemon juice to serve as a dipping sauce. Additionally, it was suggested that the smell be used around Halloween time for a full-sensory scary experience. We'll keep to culinary uses here and suggest that fish sauce's greatest culinary contribution is as a flavor amplifier. When it's the main flavor in dipping sauces, it's okay. However, when it can work with tamarind and garlic (as is the case for phad thai) or other spices, the fish sauce takes a supporting role, enhancing the other flavors with its saltiness and depth.

Garlic sauce, or chili garlic sauce, as it's sometime called, is one of two Asian sauces that goes by the name. One sauce is a red and looks a lot like Tabasco. That sauce is good, but it's not what we mean here. Instead, we want a sweet chili sauce that sometimes is called Asian ketchup. The name is fitting because the sauce has the sweetness of ketchup, though it is far more earthy than vinegary, like the American condiment.

You can pretty much use garlic sauce as is. Pour some onto chicken or pork while cooking and serve. However, the sauce's sweetness can be overpowering, so it's good to cut it with a little broth, soy sauce or even oyster sauce.

These are five basic Asian sauces. If you want to master Asian cooking, learn about these sauces, see what you can do with them and experiment. Once you have excelled at cooking these sauces, the sky is the limit. Chinese General Tso's chicken and kung pao chicken are within reach. Thai's phad sea eaw is just flavored almost solely with soy sauce, oyster sauce and a little garlic sauce. Many Vietnamese dishes are little more than fish sauce and/or soy sauce. 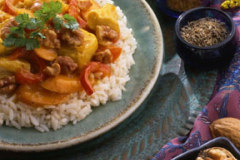