FabulousFoods   Entertaining   Other
Featured Cocktails - Black Russian and White Russian. Learn how to make these classic cocktails along with lots of nouvelle variations and explore the drink's history.

These two classic cocktails -- a mixture of Vodka and Kahlua, without or with cream or milk-- are not so named because they originated in, or are particularly popular in Russia. Rather, at the time of their invention -- before the heyday of Finlandia and Absolut, et al -- most Americans associated vodka with being a Russian export. The Cold War also undoubtedly had something to do with the drink's nomer.

Legend has it that the Black Russian first appeared in 1949, at the Metropolitan Hotel in Bruxelles. Bartender Gustave Tops created the drink in honor of then US ambassador Pearl Mesta.


Variations
Like any classic cocktails, the Black Russian and White Russian have spawned a huge array of variations. Some of the most popular are listed below:
<< Prev Article Next Article >> 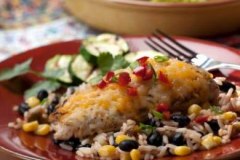